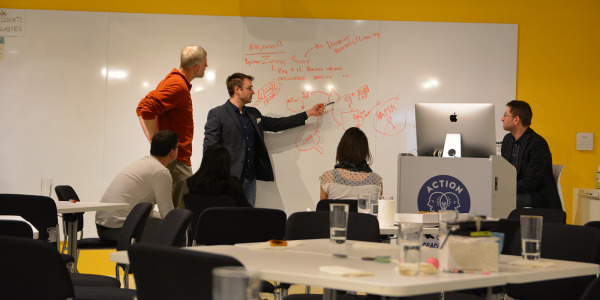 Thirty years ago, there were many architects in Edmonton and not much work. Though the city was growing rapidly, Alberta’s boom and bust economy had created a culture of disposability, where buildings were thrown up as cheaply and as quickly as possible with the expectation that they would be abandoned as soon as the economy took yet another nosedive.

Architecture was generally perceived by the city’s movers and shakers as extraneous and unnecessary. And if there was a major project, or an opportunity to show creativity and skill, talent was imported. Our city lacked the confidence and the will to express itself in its own architecture.

In response, two young architects took their talent and ambition to outside the city’s limits, and began to collaborate and design with rural and Indigenous communities. Through these experiences, they learned invaluable lessons; they learned the power of collaborative design, and how to ask the right questions and exercise imagination in the face of real scarcity. They learned how to bring to life beautiful and functional designs that do not drain resources, but that respect and integrate with the natural environment and local cultures.

These experiences set them on a path that would shape the rest of their careers.

In 1997, with these lessons still fresh in their minds, Vivian Manasc and Richard Isaac returned to Edmonton and came together to form an architectural firm in the heart of the city with a new vision and a progressive mandate. They would go against the tide, create work of quality and sustainability, and throw out the city’s conventional practice of utility and expediency above all else. They would have to work differently, even think differently, if they wanted to guide architecture towards a more promising and sustainable future.

In their first year, they launched the inaugural Sustainable Building Symposium, introducing to potential clients, builders, colleagues, and competitors the practices of sustainable architecture and design. Over the next few years, Manasc Isaac would help to develop the Canadian Green Building Council and the LEED® rating system, and would design the first Green Certified buildings in Alberta, the first LEED®, the first LEED® Silver, and the first LEED® Gold north of the 60th parallel.

The ripple effects of their new practice were such that architects, designers, and innovators from all over the world reached out, wanting to learn more about the Manasc Isaac practice. Many joined the team and collaborated to spearhead such industry-revolutionizing enterprises as net-zero design, Canada’s Green Building Council, and Glascurtain.

Manasc Isaac would regenerate architecture in Alberta. Operating from their home studios in Edmonton and Calgary, the firm’s vision of collaborative, sustainable design spread across the province, the country, and the world. They would establish two more studios in Bucharest and Vancouver, making possible the ability to work on projects and serve the needs of their clients around the clock.

In 2020, a subtle but transformative shift that had been developing throughout the years was finally articulated: Reimagine. Since its beginning, Manasc Isaac has been on the quest for the greenest and most beneficial solutions. They had been following the idea of a practice that regenerates already-existing structures into beautiful and profoundly sustainable spaces. They reimagined a design firm that works in harmony with the natural world and that gives back to the environment. Reimagine, the firm’s retrofit initiative, would mark the beginning of a new chapter in the Manasc Isaac story.

Reimagine encompasses more than a retrofit practice. Reimagine represents the firm’s unwavering dedication to collaboration, joy, creativity, and sustainability. Reimagine means that no matter how impossible the problem, there is always a solution—though it may be found in unexpected places. Through Reimagine, we embark on a joyful journey towards fresh, regenerative architecture and design.

Reimagine invites co-creation; we know that the most successful design is the one born from collaboration and community. Our process brings clients, partners, and community into every facet of a design’s manifestation. When we reimagine, we design together.

Reimagine means the safeguarding of what has come before; we reimagine place by integrating the wisdom of Indigenous cultures and designing for the demands of climate and the natural environment.

Reimagine means that we think globally, act locally. Our ideas generate and spread, sharing across borders our vision of sustainable, holistic design.

Reimagine asks the best questions to reach the best solutions.