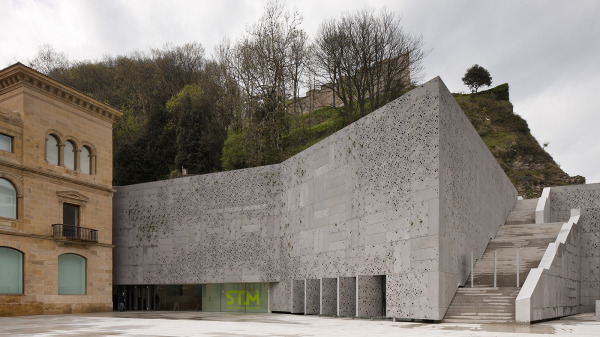 The San Telmo Museum in San Sebastián, Spain, was originally built in the Renaissance style and used as a Dominican convent in the mid-16th century. In the 20th century, it was converted into a museum for Basque art and historical artifacts. But in 2006 the Spanish studio Nieto Sobejano Arquitectos won a competition to renovate the existing building and to add an extension for more exhibition space that would respond to both the dynamic natural and urban environments, surrounding it with a perforated facade. Situated in Zuloaga Square, the back face of the extension nestles into Urgull Mountain and Biscay Bay, which flows into the Atlantic Ocean.

The project started construction in 2007 and was completed by 2011. The museum had a request for more exhibition space, which Nieto Sobejano Arquitectos answered in three parts. To restructure the family of buildings operated by the museum, the architects suggested restoring areas that held the strongest values in the historical building – the cloister, church, tower and chapel. Next, they suggested demolishing all structures attached to the original building except one structure that faces the square, which was part of the “urban memory” of the plaza, as described by the architects. Thirdly, they suggested an extension to provide cohesive public programming in the lobby, giving access to the permanent collection (housed in the original museum), as well as pavilions for temporary exhibitions, a shop, library, storage and an open air space. The opening was designed for en plein air  exhibitions, where visitors can enjoy a café-terrace, with views up to the mountain and down below to the plaza. The architects also incorporated a staircase that cuts through the building, allowing visitors to climb up past the two-storey hardscape environment to the mountain. This intersection amplifies the point where the horizontal plane of the city connects with the topographic elevation of the hillside.

“Every architectural project carries within it the acknowledgment of the boundary as a concept, which determines its [spatial] and formal configuration,” say the architects in a written statement. “Whether the materialization of that boundary should occur in a clear or blurred manner, with strength or gentleness, expressing lightness or weight, it is not a minor decision, because it reflects a specific stance when addressing the multiple discontinuities that contemporary cities face today.”

In collaboration with artists Leopoldo Ferrán and Augustina Otero, the studio designed a perforated facade on the extension, which provides altered views between the interior and exterior and acts as a border dividing the natural and man-made environment.

With the artist’s consultation, the wall was crafted into a public art piece as well as an architectural facade that highlights its surroundings by attempting to blur the separation. The wall is comprised of aluminum cast panels with oval perforations to allow moss, lichen and other native plant species to take over in curated events designed by the perforated openings. The silver-grey aluminum facade takes on the implied appearance of the plaza in the front elevation, but the vegetation that grows on it softens the divide between the sharp modern contrast of the building and the rock face of the mountain behind it throughout the seasons.

The two-sided 3,500-panel recycled aluminum casted facade is arranged in a grid. Oval holes perforate the panels at various angels to give differentiated patterning, which is then placed on an iron frame that connects back to the main structure. By rotating and flipping the panels, a varied pattern appears across the long walled facade, imitating and accentuating organic growth. Plants hang between the cavities of the panels and the building, allowing foliage to seek out the light through the oval openings.

The facade fulfills several uses with its perforations. The building’s vegetation mutates as part of the natural and artificial landscape, dependent upon the time of year. The arranged perforations in the aluminum panels provide glimpses into the interior, which alter throughout the course of a day. In the daytime, filtered light reaches the interior spaces and provides privileged views to the courtyard. At night, the speckled light from the interior spreads out into the plaza, creating intimate views. Over time the growth will take over the building in surprising and delightful ways.

One question arises as to the choice material of the panels. Over time, aluminum will dull rather than brighten, which indicates the architect was most likely interested in the growth of the plants as an expression of the natural landscape. Their growth addresses temporality through the plants’ movement, but the building itself stays the same. Therefore, if the aluminum remains relatively the same over time, its modern newness will also become part of an institutional style along with the original Renaissance counterparts left untouched by the retrofit.