Design of the Times 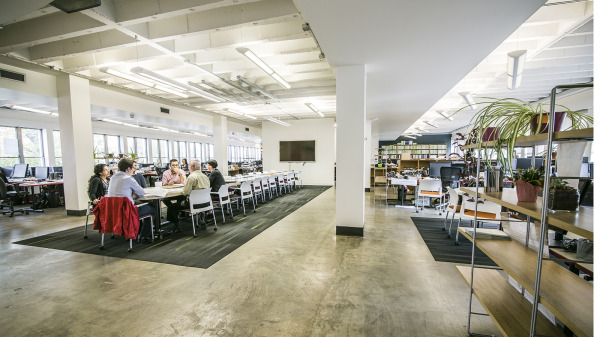 When Lindsay Gurevitch walks into a room, she sees it though a different lens then most. Working for Edmonton architectural firm Manasc Isaac taught Gurevitch to focus on sustainable design approaches on cutting-edge projects. A long history in sustainable building has earned the studio many “firsts” – even pioneering the first ever LEED-certified building in Alberta and ushering in a new era of green design.

The interior designer took full advantage of the sustainable design experience offered by Manasc Isaac, cultivating a keen sense of possibility and frugality in a design approach specifically tailored to workplace environments. This approach led to the creation of Reimagine Interiors by Manasc Isaac, a Calgary studio dedicated to transforming the city’s interior landscape.

“There hasn’t been a major shift in office design since the modern cubicle-and-water-cooler system was invented,” says Gurevitch. “We know that there are better ways to design a space. People work better in spaces that are designed for them, and tailored for what they do every day. It sounds so simple, but designing a good office does require you to shift your perspective and think outside of the box.”

A reimagined interior is one that’s thoughtfully and thoroughly considered, taking advantage of knowledge about the work being done in the space, and leveraging all inherent and existing benefits including existing finishes, furniture and natural light.

Each reimagine project begins the same way. “The first thing I look at when I walk into a space to be reimagined is windows. How much light is in here?” Gurevitch says.

Windows are a fundamental component of a reimagined project. They offer natural light, which results in energy savings for the building and healthier and happier occupants. Whether or not windows are operable also influences the sustainability and comfort of a space; fresh air is widely recognized as a benefit to occupant health and reduces cooling loads and energy costs during summer months.

“Next, I start scanning the space for anything that might be reused or repurposed,” she says. “Is the carpet in good shape? How about light fixtures? Ceiling tiles?” She notes that items can be reused across different projects; some furniture might fit perfectly into a design that the studio is working on across the street. At worst, excess finishes and furniture can be donated to a reuse centre to benefit someone else. But perhaps the most important consideration in a preliminary scan is whether or not existing walls can be maintained.

“At the end of the day, the layout has to work well. If an office’s old design doesn’t fit the workflow of your people, the space needs to be reconfigured. It’s the bones of the project.”

So, whose input helps guide the design process? Everyone in the organization should be at the table to create the new space. “It has to be everyone – from the janitor to the CEO. It’s not just about empowering everybody, but it’s about understanding how everyone works, every day. By getting to know everyone’s individual workflow, we can really maximize the space.”

Although inviting the whole team to participate in design charrettes and workshops may look like an additional investment on the surface, designers argue that it will save time in the long run. “This is part of lean design. Building the space around people’s workflow gets you away from cubicle farms. Plus, it gets everyone engaged and invested in the project.”

Today, everyone is questioning the typical office layout. While many people accept that cubicles, phones, fluorescent lights and water coolersare just how offices are, there is a growing debate as to whether this is good for people or even the bottom line.

Technological developments have changed the way people work. Telecommuting, the Internet and collaborative tools such as Skype challenge traditional office design. “Old-fashioned office concepts don’t work very well in today’s world,” Gurevitch says. “If someone is working from home or a coffee shop, or if they are out of the office a lot of the time, why should there always be an empty cubicle with their name on it at the office? It’s not an efficient use of space, and it doesn’t do the employee or the business any favours. So we say, ‘Let’s look at what people actually do on a given day.’ ”

Activity-based working (ABW) has become a raison d’être for reimagine interiors projects. It has revolutionized the way designers at Manasc Isaac approach office design. “It’s basically about designing spaces around the functions that people use them for,” she notes.

The team learned this lesson quickly working on Alberta Museums Association (AMA), who approached Manasc Isaac to reimagine its office space in 2010.The results were transformative for the organization and in the end the project reinvigorated the entire AMA team. It was among Manasc Isaac’s notable ABW experiments.

The “Three Cs” of space – chatter, concentration and collaboration– are at the heart of ABW.

Chatter space is everyone’s favourite place to gather and bond with co-workers. This is the cliché “water-cooler” space, where team members talk about their weekend or a recent hockey game. They also offer a unique opportunity for staff to bump into people, and sometimes these collisions result in increased productivity for the office. “Happy accidents take place in the chatter space. These areas allow cross-pollination between departments to happen. Many clients have written to me saying that they love the spontaneous interactions that take place in the chatter areas,” she adds.

Collaboration space is a slightly less pronounced version of a chatter space. These areas are a middle ground, places where groups can gather for focused discussions and brainstorming sessions and can include boardrooms, but more frequently represent less formal meeting areas such as staircases, kitchens and lounges.

“Collaboration spaces balance comfort and inspiration with function. These are areas where you can get down to business but in a more creative and vibrant setting than a plain old boardroom.”

For Alexandra Hatcher, former executive director of the AMA, the energy of the space’s collaboration areas proved a valuable asset to her entire team. “We absolutely love the spontaneous meeting areas; the reading nook and the chat bar,” says Hatcher. “People gravitate toward these informal sitting areas. The design improved both productivity and collaboration for our team.”

Concentration space is the bread and butter of a traditional cubicle-style office. These quiet areas are where occupants go to hunker down and get work done, undisturbed, perhaps following an inspiring encounter in a chatter or collaboration space.

“You absolutely need concentration space,” Gurevitch says, adding the reimagine approach is more about challenging the notion of one desk per person, per office. “For some organizations, having an open office with a few dedicated quiet areas works really well,” she says.

In 2013 Manasc Isaac decided to walk the talk, adopting an activity-based-working design for its own Edmonton office. “We colour-coded a map of the building with the different spaces clearly labelled. This way, everyone knows where they need to be careful about noise, and where they can go to take meetings and have conversations.” The map was distributed to staff and put up in washrooms.

Recently, open-concept offices have been given a bad rap in the news, but the style of workspace is slowly starting to catch on. “You can’t just open a space and expect it to work. Acoustic techniques need to be used to make sure that it’s well considered for sound,” Gurevitch says.

Flexibility is the order of the day in implementing an activity-based working model. By untethering occupants from dedicated desks, designers not only give staffers the freedom tocollaborate when necessary, but the arrangement also reduces the bottom line for a business. “These layouts save business owners money and even allow them to make more money. First, you need less space to begin with, due to the fact that you aren’t setting aside a certain amount of square footage for every employee, at every moment.” After all, not all employees are in the office all the time.

It can also cut down an organization’s footprint. Reducing the amount of square footage that you need, which saves you rent and operational costs. Second, if an employee has to move around or change departments, it’s easier to pack up and move around the office. You can basically eliminate this cost entirely by doing away

Another byproduct of the approach to design is autonomy and employee satisfaction, she explains. “If your team is happy and more empowered to do their jobs effectively, the whole organization will benefit from that productivity.”

When Manasc Isaac asked Gurevitch to help tweak the Edmonton studio’s layout to accommodate its growing staff, hot-desking – or the idea that occupants can anchor temporarily in a different spot all the time – made sense even for some partners.

Change started right at the top. Manasc Isaac’s principal Vivian Manasc, along with partner Shafraaz Kaba, gave up their desks and offices right away, opting to settle wherever there was a free desk on any given day. This flexibility speaks to Manasc Isaac’s corporate culture, and also happens to save the organization space and operational costs.

Just as something as simple as a personal choice of shoes affects first impressions, the esthetics of an office can make an immediate imprint. “When you walk into a reimagined space, you should instantly connect with and feel the organization’s corporate culture. Are they fun? Progressive? What’s their story?” asks Gurevitch.

For Manasc Isaac, the transition to ABW was a worthwhile one. Nearly a year after the completion of the new office design the studio’s 60 employees have not only adjusted to the style, but they have embraced it.

“I like how open it has made the office feel,” explains Manasc Isaac proposal writer Gloria Alamrew. “Even though the different spaces are clearly delineated, the office doesn’t feel ‘sectioned off ’ anymore. We have the work pods throughout the office, which everybody understands and respects as concentration space. We can put on our headphones and really focus.

“My favourite spaces are the informal gathering areas like the couches by reception, or even the kitchen with its big bar table. They really invite you to chat and mingle, and that environment tends to stimulate very productive conversations,” says Alamrew.

The journey wasn’t an easy one, she adds. “After the renovation, I wasn’t sure how the transition to ABW would work and like with any big change there were a few growing pains. But once the dust settled it was pretty neat to see how easily everyone settled in. It felt very intuitive.”

For the Alberta Museums Association, culture is an important part of the design, too. “This design reflects where we want to go as an organization,” says Hatcher. “We’re open, vibrant and thinking about the future.”

The best reimagined interiors require considerable thought, as well as buy-in from the entire organization, not to mention careful attention to the unique workflows of each employee, says Gurevitch. “A successful interior is one that’s designed around two things: the people and the brand.”