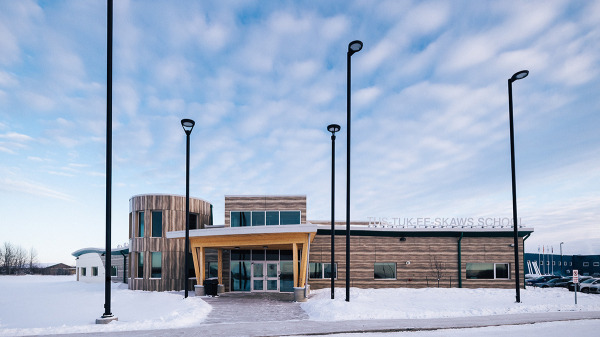 On April 5th 2022, Frog Lake First Nation could finally celebrate the grand opening of their new Jr/Sr High School Tus Tuk ee Skaws with nation members and partners. There was something in the air yesterday morning, other than large April snowflakes. Coming together feels foreign since COVID first began, but there was a special warmth and familiarity in yesterday's celebration.

A roar of life filled the bright and open halls of the new school, especially in the existing back gymnasium where students, school staff, administration and band members, community partners, and community members all gathered in a long- awaited celebration of this new chapter. After a pipe ceremony, the grand opening ceremonies began. Band Manager William Quinney was MC for the day. Elder Raymond Quinney opened with a prayer alongside Cecile Dion: “The time of colonialism is fading," he said. "We are resilient people." Chief Desjarlais gave a beautiful address as did Frog Lake education Board Chair, Wanda Henderson.

Councilman Cliffton Cross took the floor with a passionate speech on the importance of "firsts" this new building represents. The library, housed in the large auditorium at the school's centre, is a member of the Northern Lights Library System, which makes it the first First Nations community to be a member of a provincial library network, providing Frog Lake residents with access to thousands of books and resources. Cross repeated the quote "education is the new buffalo," highlighting the importance of it for life and opportunity. Mary Jane Quinney, who was a part of the entire planning and design process, spoke of the history of the school and all the thought that was put in every step of the way. Vivian Manasc of Reimagine Architects announced that Reimagine would offer, as a gift to the future of the community, a scholarship for Frog Lake high school students interested in architecture,  engineering or technology related to the built environment.

To close, Elder Ernest Stanley spoke on the name of the school and the importance of sharing and treasuring that history of the name of the Frog Lake Chief who signed Treaty, Tustukeeskaws. Glenda Bristow, Director of Education, closed with a personal account of her story of returning to Frog Lake in this new role.The ceremonies concluded with an eruption of clapping and cheering.

The excitement was contagious as people moved into the school for the ribbon- cutting ceremony and school tours. Eric Faithful and community members performed an Honor Song, which created a beautiful rumbling in the main foyer and carried throughout. There I got to hear some comments from students. One young man in grade 7 said he "loved it!" as he and his friends were running around soaking it all in. Another grade 12 student, said the new school "gave [him] a place to be at home and be secure." The classmates around him nodded in agreement and a few said they wished they had more time in the space before graduation, although a few were interested in teaching and coming back to the school in the future. We all look forward to seeing how it evolves and continues to impact the community.