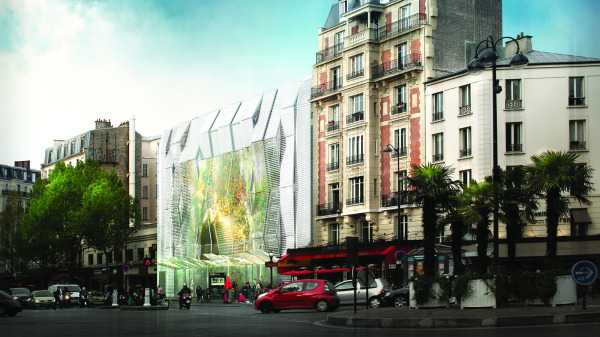 Located in the centre of Paris, France, the Alesia theatre is undergoing a rejuvenation that will not only recreate the physical space the theatre occupies but also breathe new life into the cinematic experience.

Owned by Gaumont-Pathé group, the Alesia was built in 1921 under the name Montrouge-Palace and was then a one-screen theatre with 2,800 seats and an orchestra pit. The structure was made of reinforced concrete, which, Manuelle Gautrand, principal of Manuelle Gautrand Architecture, says represented a daring and modern approach to architecture. “Until the beginning of the 20th century,” Gautrand explains, “concrete was used most of the time for pipes and industrial buildings.” She adds that many architects would have scoffed at the idea of building a theatre out of reinforced concrete, preferring the material for utilitarian buildings rather than cultural landmarks. After the 1900s, though, “reinforced concrete began to be used by modern architects as a new approach.”

This isn’t the first major renovation the Alesia will see. It’s been through several transformations, first in 1951 with a new 2,000-seat cinema and again in 1973 when its named was changed to Gaumont-Sud and the rooms were sized down to create a total of four movie screens. A decade later, the building was again rejigged to offer seven cinemas. Under the name Gaumont-Alesia, the building sported a new blue facade with enormous, jaunty clapboard affixed beneath the name. In 2004, during its last renovation, the venue traded in its blue exterior for a more toned-down beige version.

Through all of these reinventions, the Alesia’s exterior retained its shape, its 25 metre facade stubbornly calling back to the 1950s even as the buildings around it changed and modernized. Something had to be done, explains Gautrand. “The theatre is implanted on a very commercial street, and the old boutiques have progressively been replaced by brand new shops or restaurants with modern equipment and facades,” she says, adding that the muted tones of the exterior also looked a bit bland. “In this environment, the Alesia theatre as it was looked a bit outdated.”

In 2011, the Gaumont-Pathé group decided to completely reinvent the Alesia to not only improve the quality of the movie-going experience but also create an enticing space that, on the outside, captured the imaginations of passersby and, on the inside, lit up the eyes of its customers and created a sense of movement and discovery all throughout the theatre.

The company operates many theatres in France – 16 in Paris alone – and is working on reconstructing many of them. The theatres are often “installed on magnificent sites but suffering from a sometimes dated image,” according to a press package about the project, created by Manuelle Gautrand Architecture. The goal, then, is to create not only a movie theatre, but a cultural space that is lively during both the day and at night and able to mix film with other cultural programs. “The image of the movie theatre in the city must be totally renewed,” the company says.

Construction on the €12-million project began in 2014.The new vision for the theatre: eight movie screens with a total of 1,380 seats in a 5,000-square-metre space. The rooms will be assembled in a way “where the rooms intertwine, one next to the other, in an elaborate puzzle,” says the press kit. Seating inside the rooms will be bleacher-style, in small amphitheatres. The shape of the bleachers will be visible from underneath, and the stair motif will continue into the other spaces, encouraging guests to circulate through the public space.

The screening rooms themselves will have excellent acoustics and high-quality images, but the facade will be the crowning glory of the Alesia theatre. Dressed in a transparent screen made of thousands of tiny LEDs, the facade will broadcast images on the front and the back. “It was a wish to have the public wandering into the atrium,” Gautrand says of the unique design element, “having at the same time a view on the street with a moderate visibility and a view on the facade with the LEDs illuminating the inside with soft light.”

The facade is made of 12 vertical panels. “Each thread is supporting several facets, successively oriented upwards or downwards,” explains the Manuelle Gautrand Architecture press release. The transparent screen uses LEDs of varying density, with the highest-density LEDs at the centre of the screen, the image becoming lighter as it gets closer to the edges of the facade. In the centre of the screen, the panels are glazed and covered with bars of LEDs while on the edges of the facade, the panels are built of metal cladding to make them opaque. Then they’re either covered with the same LED-coated bars as the middle of the panel, or just pleated to “reproduce the rhythm of the LEDs.”

Gautrand says she wanted the building to be more than a place to display movie posters. “This is why I decided to make the whole building a screen,” she explains. “Not a screen you can see in projection rooms, but a screen in a poetic way.”

Inside the building, an LED-covered canopy will also broadcast images and animations. “I wanted to make the audience feel like they are going inside the image as they enter the building,” Gautrand says.

The building is accessible via a hallway that extends from one side of the building to the other. Depending on what side of the building the guests enter, they’ll either see the ticket office and machines or a place to purchase snacks and drinks. On the other side of the entrance lie the paths to the screening rooms, going either upstairs or downstairs. The fluid nature of the design will be reflected in the way guests reach the upper storey projection spaces, going through walkways, footbridges and escalators that take the audience through different mezzanines, all in a three-storey atrium that connects the floors and allows guests to see the spaces below and above them, as well as the street.

Gautrand says her favourite part of the design is the new atrium. “It is a meeting place, almost a space of leisure by itself. It will be quite a magical space, with the LEDs projecting their soft light from the outside,” she says. “I wanted to give importance to this part of the theatre which is, according to me, as important as the projection rooms by themselves.”

As per City of Paris requirements, the new building will consume a smaller amount of energy than its predecessor. The LEDs are low-energy lights and an energy efficient heating and cooling system will be installed.

The building isn’t set to open until spring of 2016, but Gautrand says reactions to the redevelopment have been positive. “The neighbours have been impressed to see the old concrete arches that dated the first cinema in 1921. The renewed attention for this building was really enjoyable to observe,” she says, noting that many people have been taking pictures of the project and sharing the images on social media.

For Gautrand, as well as the Gaumont-Pathé Group, reinventing the Alesia theatre was never just about providing a place to watch movies. “I wanted to make this cinema an exceptional cultural site,” Gautrand says. “This project had to be highly visible on the street and very attractive. The whole building is a tribute to the art of the cinema.”