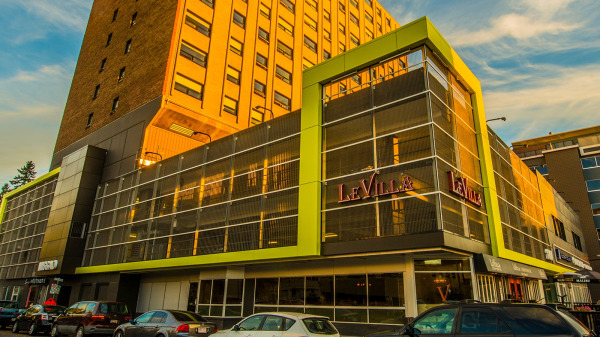 As the city of Calgary emerged from the devastation of the 2013 flooding, as debris was cleaned up, electricity restored, and as life once again bustled in the downtown core, it was fitting that the first post-flood development permit the city issued would also facilitate another transformation. The project: redeveloping the 1800 building, a mixed-use structure named for its address (1800 – Fourth St. S.W.). The building is located in the Mission area, south of the downtown core, which was among the places in the city hardest-hit by flood damage.

Thanks to its higher elevation, the 1800 building hadn’t been harmed in the flood. The ground level of the building features several retail rental units, and office spaces fill the floors above, crowned by several floors housing 100 apartment units. Strategic Group, a Calgary based real estate development and property management firm, purchased 1800 – then known as Hillsboro Tower – in 2010. Randy Ferguson, Strategic’s chief operating officer, concedes the original tower wasn’t much to look at. “You would see this tall parking structure, then you’d see a rather dilapidated facade to the south,” he says.

Though the building’s interior was also in need of an update, Ferguson says the exterior was the most urgently warranted fix. The dated brown-and-beige façade edging the retail spaces made the property resemble a run-down strip mall more than a proud member of the up-and-coming Mission district. “Passersby who don’t have a reason to enter the building won’t see the inside, but the entire community sees the exterior. It was dilapidated and uninviting,” Ferguson says.

But the leadership team at Strategic Group wasn’t put off by the building’s lackluster veneer. With the stated objective of “creating value others can’t by seeing what others don’t,” Strategic found the 1800 project a perfect fit. “Our company plan around the acquisition of properties is to redevelop, repurpose and re-use – to bring properties up to today’s standards in terms of how they appear and how they fit into the neighbourhood, to modernize and make our environments more pleasant so our tenants and customers have a better experience in our buildings,” Ferguson says.

With Manasc Isaac Architects’ help, Strategic Group developed a new vision for 1800, transforming the colourless eyesore into a winsome monument for the Mission neighbourhood. The parking garage is clad in metal mesh, which lends texture and dimension and creates a sense of continuity with the rest of the retail space.

Enter designer Claire Johnson of Manasc Isaac, who says the vision for the property was to bring an element of cohesion to the building’s various constituents. “The concept of the design is to pull the building together and emphasize the corner, drawing people in and creating a landmark,” Johnson explains.

Ferguson says that the exterior work didn’t only benefit the building’s appearance; it also boosted 1800’s overall efficiency. “When buildings get of a certain age, they begin to have air leaks that your mechanical systems must compensate for. By replacing things like the facade and the retail storefronts, we made the building much more efficient,” Ferguson says.

Refreshing older buildings is a more sustainable approach than tearing down and building new ones. “We have a large existing building stock and it is not sustainable environmentally nor economically to keep building new and discarding the old,” Johnson says. “You can achieve large energy savings and dramatically decrease running costs by focusing on both the building skin and system together, plus there is the immense satisfaction of the before-and-after comparison, from an aesthetic point of view as well as quality of the indoor environment.”

Along with its reworked exterior, the building now also boasts a renovated interior, with new HVAC systems and occupancy sensors that save electricity by turning on only when needed. The residential units were re-done as well; as tenants moved out of the building, vacant units were ripped apart – right down to the original concrete structure – and rebuilt. “By the time we were finished it was a brand new apartment,” Ferguson says.

The offices got the same treatment. Upon being vacated, they were torn down to the concrete and redone. Except, Ferguson notes, for those whose tenants who decided to stay in place and work through the renovations. “We’ll renovate those offices when they’re empty, but we’d just as soon the tenants stay 100 more years,” Ferguson says with a laugh.

For the building’s retail clients on the other hand, it was business as usual through the construction process.

This prompted the question: how do you completely transform a structure while making sure retail customers and building tenants still have access to it? Very carefully, says Ferguson, noting, “It created another element of complexity.”

Aware of the need to minimize disruption to 1800’s tenants, the Manasc Isaac team developed a detailed schedule listing all facets of the project: from when materials were to be delivered to when there could be work going on, all balanced against the staggered hours of the various businesses operating from the building. The interim result was that businesses that could still operate and the renovation schedule continued without delays. “Front-end planning is the greatest risk mitigator,” Ferguson says.

One of the aspects of the 1800 reimagining that stands out for Johnson was the relative absence of construction waste. The façade was built in collaboration with Calgary-based Ferguson Glass and the framing and glazing design could be custom-made to work with the sizes of the material available. “So whilst maintaining the intent, we saved a significant amount of material from the landfill, as well as keeping the costs down for the owner,” says Johnson.

It’s the new mesh-lined parking garage that stands out the most in Ferguson’s mind, partly because, in the old space, the garage was one of the building’s most obvious aesthetic problems. “The building was craving a consistent look that spoke to a parkade, retail space and an office all together. We struck a balance in terms of material. The selection of mesh mutes how that structure loomed off the site,” he said.

The final phase of the project finished up this past September, so there hasn’t been enough time to say how much more energy efficient 1800 is post-reimagining, but Ferguson knows it’s already positively contributed to the neighbourhood. “We’ve had a great many compliments from all of the constituents involved,” Ferguson says, emphasizing that the refreshing, urban feel of the new exterior has a more enduring design than the original 1970s version. “We wanted to create a design that is more or less timeless so you can look at it today and enjoy it today, and keep enjoying it 10 years from now. This is what Manasc Isaac accomplished for us. They did an outstanding job of creating something we can be proud of.”

For Johnson, the success of the project can be summarized by the way it’s now classified by other Calgarians: “It’s no longer the car park on 18th Avenue and Fourth Street, but ‘the cool building with the green stripe.’ ”