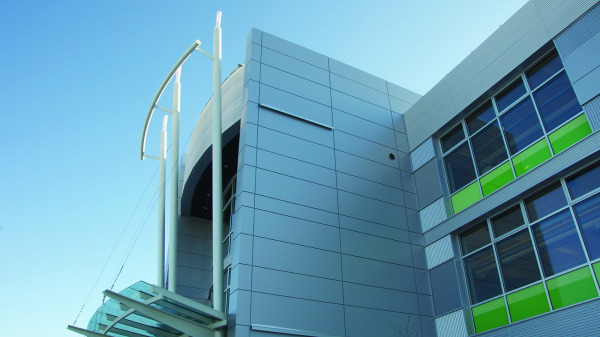 Servus Credit Union is an Alberta community-based financial institution with a progressive approach to doing business. The largest credit union in the province, Servus takes pride in its community leadership, performance and corporate social responsibility commitments. In 2007, Servus approached Alberta architectural firm Manasc Isaac with a request: to transform a recently purchased former call centre into a healthy, vibrant workspace for 400 of its staff.

The firm’s first visit to the site revealed that this retrofit would be a challenging one for both designer and client. The building that Servus had purchased was ideally situated in the dynamic Edmonton Research Park, and was effectively new, having only been occupied by its previous owner, Dell Inc., for two years. The facility was a duplicate of another call centre in Oklahoma, and Dell found it not feasible to maintain the two centres, so it closed up shop in Edmonton.

A near-new building seemed perfect, but there was a twist to the plot. The American design of the original structure had not factored the severity of Alberta winters. Beyond operational cost implications, this inefficiency also compromised the building’s environmental performance.

A company committed to environmental sustainability, Servus confirmed its need for a sustainable head office when it approached architects at Manasc Isaac. Servus and members of the Manasc Isaac team met to determine the best solution for the institution. A decision had to be made: reimagine or rebuild. Ultimately, the design team and owners identified reimagining (and particularly re-skinning) the structure as the best solution for the company, its employees and the environment.

“When Servus was looking for a new corporate centre, we considered this building because it would allow us to move in much quicker than building a new one,” says Brian Los, senior manager of properties at Servus Credit Union. “It also allowed us to incorporate many energy efficient features to achieve a LEED Silver status.”

The team took dramatic steps to transform the building into the dream office that Servus had envisioned. Today, the Servus Corporate Centre stands as an environmentally responsible landmark, showcasing the organization’s strong and vibrant corporate image while delighting staff and visitors alike.

When the design team first visited the space, it found that the call centre’s key design focus had been to maximize occupant capacity. “Walking into the first iteration of this building was like walking into a teenager’s basement bedroom,” says architect Myron Nebozuk. “Dark and disconnected from the exterior, many of the previous call centre spaces were solely focused on customer service beyond the walls of this building,” he explains. “As we walked through the mothballed building, the design team was struck by the facility’s twilight quality, even with all of the lights turned on.” Nebozuk and the team resolved to make things better and brighter, suggesting an interior atrium to give more people more access to natural light and views.

The design team suggested punching a large hole in the core of the structure, bringing light into the centre of the building and creating a heart for the office. “Cutting a hole in the floor is no simple matter,” says architect Vivian Manasc. “It results in less office space and it affects the building structure; cutting holes has to be done carefully, to keep the structure stable.”

Yet the benefits promised a huge payoff. Daylight helps to reduce operational costs by adding natural lighting, and more importantly, it improves the look and feel – the architecture – of the space, boosting employee productivity and health. Employees can now look out windows adjacent to their workspaces and see the sun, sky, grass and even the changing weather.

This open atrium is the location of a dramatic feature staircase that connects each of the building’s three floors. Serving as a meeting point for employees, the staircase fosters collaboration and cross-pollination between departments. Featuring a rare steel construction, the staircase even flexes as users climb or descend. By making the staircase interactive, the design team ensured that occupants would want to take the stairs, in turn helping maximize the atrium’s physical, mental and social benefits.

Thermal imaging scans identified areas of thermal inefficiency in the building. Although the envelope, itself, was made of durable and proven materials such as brick, concrete and steel, the envelope’s functioning resulted in significant heat loss. It was clear the building needed additional insulation to withstand Edmonton’s climate; the design team resolved that a re-skinning (or installation of a new building envelope) was necessary.

The new skin wraps around the exterior of the building like a blanket, boasting two layers of additional insulation over the old brick and concrete. Finally, metal cladding encloses the insulation and offers a well-sealed rain screen. The results were radical, yielding instant benefits in both operational costs and occupant comfort.

Building science engineer Mike Turner says that “even when the work was incomplete, the recladding proved to have a considerable effect on the conditions inside the building. Construction workers in the building noted that the only drafty areas in the building were where the cladding work hadn’t been finished,” he explains. “The result is more consistent temperatures year-round, especially in office areas close to the exterior. This means improved comfort within the building, and improved durability of the structure itself.”

Windows can be a blessing or a curse to a building, depending on their quality and sustainability credentials. Since the former owners had not invested in efficient windows, the design team opted to install all new windows. A high performance Visionwall system was chosen. An innovative technology developed in Switzerland, these windows provide the highest window R-values (which measure thermal resistance and ultimately efficiency) on the market without reliance on inert gas fills. These are no small savings: the new windows are three-and-ahalf times more efficient at reducing heat loss than the building’s previous versions. Equally important to their energy efficiency is the fact that the occupants can open each window, optimizing each employee’s control over his or her work environment. It also saves operational costs by reducing the need for artificial cooling, saving money and energy.

Facing north, the space’s new “donut hole” atrium dramatically increased daylight in the building. A large opening was cut into the roof, second and third floors of the existing building, and the clerestory now features windows two metres in height. These windows can be opened, providing natural ventilation and fresh air for the building.

Ultimately, the addition of daylight to the centre of the building reduces its electricity use by 32.5 per cent and boosts employee health. The ever-changing character of the light during the day connects employees to nature, and to each other. Fresh air and daylight make for a sustainable and healthy space, and perhaps less obvious is the selection of materials that surrounds building occupants throughout the workday. The design team made sure that the materials used in this project were both sustainable and healthy choices.

In fact, a large number of the items in the building are made from recycled materials. Coat hooks, shower curtain rods, mirror and stainless steel shelves were created from objects that had other applications before the reimaging. Dawson Wallace, the project’s general contractor, exercised careful management of waste during the demolition and construction process, ensuring a maximum reuse of material. From donating old lockers, to reusing communication system cables and repurposing more than 90 per cent of the building’s former carpets and floor tiles, waste was kept out of the landfill during the Servus Corporate Centre renovation.

Servus had no need for a kitchen in its new facility, and the one Dell had installed was in disuse. As luck would have it, Manasc Isaac was in the midst of a school renovation in a neighbouring community – and the school’s funding did not allow for a kitchen. Though the school planned to fundraise for a kitchen, there ended up being no need: Servus was happy to donate its lightly-used and Energy Star-rated appliances to the school where it now serves 1,500 students.

The Servus Corporate Centre features a generous amount of wood throughout. Staff and visitors might notice its use at the reception desk, copy room cabinetry, and elsewhere. Certified by the Forestry Stewardship Council, the wood is a product that passes through the hands of ecologically responsible producers, from the forest to the mill to the building.

The design team’s choices are not just sustainable, they are healthy. Unlike some furniture and building materials that release toxic gasses, the design team specified products thatwould not negatively impact employee health or indoor air quality. Some green upgrades are not immediately visible in the Servus head office. Boilers, for instance, were retrofitted with new burners. By replacing the burners to match the load, the design team was able to increase energy efficiency and decrease operational costs, all while extending the life expectancy of the equipment itself.

Since the Corporate Centre won’t see occupants squished into the workspace like sardines, it made sense to pull and replace mechanical ducts to accommodate smaller, more sustainable occupant numbers.

As so much natural daylight floods the building via the atrium and clerestories, it relies less on artificial lighting. New motion detection sensors help achieve energy conservation, turning off lighting in areas that are unoccupied. These simple mechanical upgrades work together to ensure that Servus Corporate Centre performs as a lean, smart and efficient facility.

Of the international certification standards, the best known is LEED, which stands for Leadership in Energy and Environmental Design. Once a decidedly unsustainable and dingy call centre, the Servus Corporate Centre is now a hallmark of sustainability, awarded LEED Silver certification in 2012. The certification reflected consideration of many factors, including air quality and comfort, reuse and recycling strategies, and energy efficiency.

The certification is a holistic one: other factors look beyond the building itself. Site considerations and water usage both earnpoints toward LEED certification. Near a major transit hub, public transportation serves Servus well. The team eliminated the need for the landscape irrigation system the previous owners had installed so they removed it.

So, what does the inclusion of all these leading edge, but simple, green building techniques mean for the building at the end of the day? For one, the process resulted in a group of happy clients, Los says. “The Servus staff is enjoying the new space and the organization is benefitting from the co-location of our staff.”

Los adds that Servus is very proud of this building and the partnership with Manasc Isaac. In concert, they have achieved a great look and practical feel for Servus’ employees, members and the greater community.