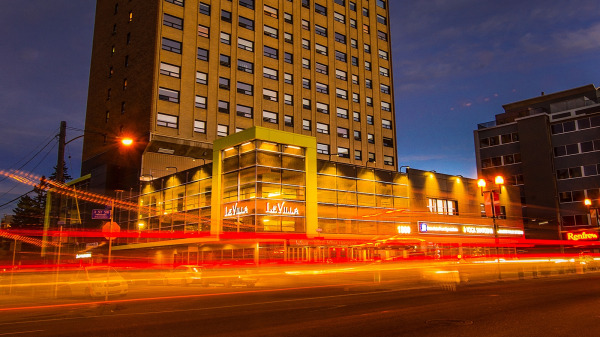 Shortly after the baby boom came the office-building boom. In cities across the country, developers and planners cleared their cores for low-rise and highrise buildings that would fill up and drain out with white collar workers as the sun rose and set.

Further accelerated by the oil rush, Edmonton and Calgary’s towers went up so fast there was little regard for heritage or energy conservation. But, then again, that was the zeitgeist before the oil crises of the 1970s.

Today the commercial and institutional sector that inhabits many of those structures makes up 13 per cent of energy use in Canada, and the buildings themselves are d’un certain âge. Yet another oil rush has brought rapid growth to Alberta and office-building owners now face the same question their predecessors had. Should they preserve what they have, knowing full well they’re underperforming, or destroy and rebuild?

There’s a third possible fate for such a building, too, though it’s often overlooked. It can be reimagined; that is, re-outfitted with an attractive facade, energy-efficient envelopes, mechanical system upgrades and other redesigns that make it more comfortable and more inviting for its tenants and passersby. And though a holistic rehabilitation can sometimes cost just as much as new construction, more property owners are realizing the long-term benefits to their pocketbooks, tenants and planet.

Randy Ferguson, chief operation officer of Strategic Group, is one of them. When Strategic purchased the Hillsboro Tower in Calgary’s Mission District in 2011, the 30-year-old eyesore looked like a “dilapidated strip mall,” he says. The retail on the lower level had a brown and beige facade, pointed gables reminiscent of a suburban garage and a cluttered walkway. The parkade above was opaquely fenced and adorned with a large and gaudy damask print. “It was dated and it didn’t present itself well to the street,” he says, “but it had tremendous potential.”

Upper-end retailers and restaurants were cropping up in the surrounding spaces and the Calgary based company wanted a piece of the action. Ferguson approached Manasc Isaac Architects, with whom he’d worked before joining Strategic Group in 2012, and soon the architects and engineers from the Alberta firm had a feasibility study to reimagine it.

Luckily for Strategic Group, 1800 4 Street SW, which has since been renamed “1800,” required a minor makeover compared to some of its other 72 operating assets across Calgary, Edmonton and Surrey. So now, two years since the feasibility study for the tower, drivers and passersby see a bright and steely facade, a lauded high-end French bistro and open walkways. A bright green band streaks across 1800’s rounded upper-body and spikes like a vital sign. Indeed, it got a second life.

At the time that Vivian Manasc, senior principal of Manasc Isaac, was studying architecture at McGill University, the world had just experienced the 1973 OPEC embargo and witnessed the price of oil quadruple overnight. “It influenced what we discussed in school,” she says. “There was a lot of consciousness to energy conservation.” As climate change became the crisis of her generation, the conversation only got louder, and the need to do something about these energy-sucking office buildings got more urgent.

Early in her career, the Edmonton architect made environmentally friendly design a signature of her work. In 2002, she co-founded the Canada Green Building Council and became a LEED-accredited professional, that is, someone knowledgeable about green building technologies, best practices and the ever-evolving Leadership in Energy and Environmental Design rating system. Over the years, she has been impressed by how the international brand has enabled a discussion about sustainability.

“People think it’s a rating system but it’s actually a language,” she says. “You can write the National Enquirer with that language or you can write Shakespeare. It doesn’t determine how well it’s being used. It’s a means of communication.”

Manasc Isaac had been designing new as well as reinvigorating existing buildings to be high performing for 30 years, but it recognized that without a name the conversations around the work lacked consistency. Manasc Isaac’s holistic transformations, as well as those being done around the world by like-minded firms, were more than a retrofit, repurposing, renovation or re-skinning.

Five years ago, the team decided to coin the term: reimagine. The lower-case “r” was an invitation and challenge for the real estate industry to use it too. “As architects, we have the opportunity to influence, and an obligation to do the right thing around everything we design, everything we touch,” says Manasc. “We often talk about how great it is to design sustainable buildings – and that’s great, that’s nice, but for every new building that one designs, there are a hundred or a thousand old buildings.”

Of course, the responsibility doesn’t solely lie with architects. Property owners must raise their standards, tenants must want to associate themselves with environmental practices and governments must enable it with building codes or financial incentives – or both, as the City of Toronto did. Since the 1996 Better Buildings Partnership initiative to reduce CO2 emissions was implemented, that city has invested $711 million into reimagining more than 2,000 buildings and 500 million square feet of office space. In total, industry watchers estimate that the city has collectively cut CO2 emissions by 560,000 tonnes – or the equivalent of pulling 73,684 cars off the road for a year.

Though the market is transforming more slowly than Michael Brooks, CEO of the Real Property Association of Canada (REALpac), wishes, he says the national trend is moving toward sustainable design. “Most big office tenant firms want to be associated with sustainability and are accordingly asking their landlords to green the buildings they occupy – or they’re moving,” he says. However, the focus is largely on new construction, and existing buildings risk falling behind.

For too many building owners, there’s little pressure to upgrade because tenants often pay the energy cost and, as Brooks puts it, “If the tenant is not complaining and the building is full, why would a landlord bother?” But as Strategic Group and other Manasc Isaac clients know full well, there are many reasons that go beyond increasing the market value. “The evidence just gets stronger every year that sustainable and green buildings are worth more, lease up quicker – and for higher net rents.”

When a feasibility study is called for, as it was for 1800, Manasc Isaac brings a technical team to the building and parks itself there, sometimes for a whole week, to examine all its conditions and aspects, from engineering to zoning. Whether it was the Edmonton Public Library’s flagship location or an empty remand centre, “We’ll set ourselves up – a folding table in a big empty hallway works – and we’ll start to work through the options,” says Manasc. “We’ll funnel it down to four or five conceivable scenarios and we show them the must-do, should-do and nice-to-do investing.”

The Strategic Group building is just the first of many properties in its holdings about to be reimagined. “Before, if you thought about doing that on an existing building, there was no chance at all you could make economic sense out of it,” says Ferguson, who has worked in real estate for 38 years. “When I look back just two decades ago, it’s like looking into the dark ages. Technology has moved us forward very quickly.”

It’s true that LED lights and solar-panelled sunshades (like those at Manasc Isaac’s very own reimagined office) have helped building owners achieve higher green standards, but there are some basics too. Windows that open, for example, are sadly rare in office buildings despite the comfort workers get from being able to connect to the outside. Another is clear glass that lets in the sun for better daylight and psychological comfort.

Fixtures aside, a big focus for reimagining is better insulating the building envelope, which Manasc describes as its coat. “Buildings are a lot like people,” she says. “If you go outside in the cold, your body can only generate so much heat. There’s a couple of ways to solve that problem, the least expensive being putting on a warmer coat.” You could add a bigger boiler – the building equivalent to energy bar – but that only works if energy is cheap or free, which it rarely is. “If your mechanical systems are at the end of their lives and you have to replace them anyway, the old way was to buy a new boiler. The reimagined way is to improve the envelope and do with a much smaller boiler.”

Though the conscientiousness of the real estate industry has come a long way, it’s still got far to go. “The biggest challenges are indifference and the attitude that high energy use is just the cost of keeping the doors open,” says Bob Hawkesworth. The former Calgary alderman and Municipal Climate Change Action Centre coordinator helped implement the first government green building policy for the City of Calgary. The sense of pride the community gets out of this, he says, is another overlooked benefit.

Although there’s a patchwork of energy-saving incentive programs across Canada, most exist at the municipal and provincial level. REALpac would like to see the federal government do more. “There’s old building stock in every city in Canada,” he says.

Without such incentives and language to lead the conversation around sustainable building, developers might still think that tearing things down and building is the cheaper option. “If you don’t think about it the right way,” says Manasc, “you might come to the erroneous conclusion that you need to tear it down.”

She adds, “The greenest building in the world is one that already exists.