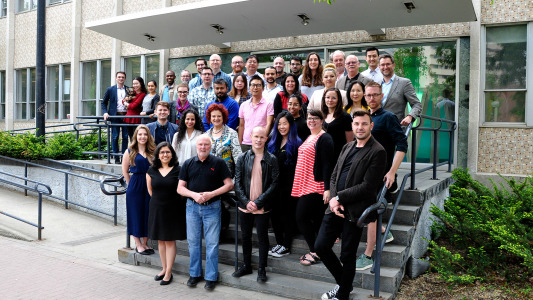 As one of our firm’s founding partners, Richard has played an integral role in the evolution of Reimagine. Originally from England, he graduated from the Oxford School of Architecture (now part of Brookes University, Oxford) with a Diploma in Architecture in 1976. Later that same year, he travelled to Hamburg, Germany, and gained experience working in several architectural studios.

1982 found him travelling to Canada with Frontiers Foundation, an organization of volunteers working in northern First Nation communities. For three years, Richard lived and worked as a volunteer in Wabasca, assisting First Nation people with a variety of design and construction projects, including a log community centre. That experience, and his meeting with Vivian in 1986 and the subsequent creation of Manasc Isaac Architects (now Reimagine) were formative milestones of his life and career. “These experiences gave me exciting challenges that I endeavoured to meet and succeed at."

Today, Richard maintains an overview of all the firm's projects, while also acting as Project Design Architect. His commitment to healthy and sustainable design has evolved a passionate interest in nature. In nature, he believes, we can discover solutions and the most sustainable lines of inquiry for architecture and design. Richard sees design as a fascinating process of discovery: developing various alternative solutions and then working with a client to determine the one that best suits their vision and needs.

Alongside architecture, Richard has a passion for reading and has a large library in his loft which he shares with his wife, Documentary Producer Rosvita Dransfeld. He is an avid tennis player, getting out on the indoor court at least three times a week.